A CUTTING edge fighter jet capable of cruising at speeds of around 1,000mph without afterburners will once again be taking part in this year’s Wales National Airshow.

Swansea Council can confirm that the Eurofighter Typhoon will be returning to the event this summer! Flying out of RAF Coningsby in Lincolnshire, Flight Lieutenant Ryan Lawton will pilot this year’s Typhoon displays.

With a maximum speed of over 1,300mph, the Typhoon can reach an altitude of 55,000 feet. Measuring close to 16 metres in length, the aircraft has a wing span of over 11 metres.

Swansea University will be the event’s main sponsor this year, with the Red Arrows having also confirmed their participation.

Frances Jenkins, Swansea Council’s Strategic Manager for Culture, Tourism, Marketing and Events, said: “We’re delighted to announce that yet another world class display team has confirmed they’ll be taking part in this summer’s Airshow, ensuring that we meet our objective of delivering an event that continues to meet people’s expectations, year on year.

“As the council continues to work on the event’s organisation behind the scenes, residents and visitors can expect more confirmations over coming weeks.

“As well as aerial displays, ground-based entertainment will also form part of the event, which is being held this summer for the third consecutive year.”

The Wales Airshow is set to take place on the weekend of Saturday July 1 and Sunday July 2 2017.

The Red Arrows will be taking to the skies on both days of the free Swansea Council event on Saturday July 1 and Sunday July 2.

Officially known as the Royal Air Force aerobatic team, the Red Arrows have performed over 4,700 displays in more than 50 countries across the world since the 1960s.

It’s also been announced that Swansea University will be the Wales Airshow’s main sponsor this year.

“They’re among the most popular and famous aerobatic teams in the world, so it’s testament to the event’s organisation, quality and continuing popularity that they’ll be taking to the skies above Swansea Bay once again in July.

“We’re also delighted that Swansea University is now on board as the Wales Airshow’s main sponsor this year. This will allow the event to link-in with the university’s world-renowned aerospace engineering department, while also opening up a whole raft of new opportunities to make the event more successful than ever before.

“We look forward to working closely with Swansea University to ensure the Wales Airshow 2017 is once again an event to remember for local residents and many thousands of visitors to the city.”

Other aircraft that took part in last year’s Wales Airshow included the Battle of Britain Memorial Flight, a Russian MiG from the Cold War and the Tigers parachute display team.

Ms Jenkins said: “Keep an eye out for more announcements over coming months as we continue to confirm other exciting additions to the Wales Airshow 2017 programme. The event will once again be a highlight of the fantastic Enjoy Swansea programme of events and activities.”

Early bird partnership packages are still available for businesses and organisations looking to be involved in this summer’s Airshow. Email mags.pullen@swansea.gov.uk for more information or call 01792 635102.

We are pleased to announce that Swansea University has been confirmed as the main sponsor for this summer’s free Wales Airshow.

2017 sees the Airshow return for a third year in a row and we’re very excited to have the University voted “Welsh University of the Year” by the Times Higher Good University Guide 2017.

Last year, the Airshow, part of the Enjoy Swansea programme of events and activities, attracted more than 200,000 spectators. As well as from the promenade, many people also watched the Airshow from the city centre, Mumbles and a number of other vantage points across the city.

“Swansea University has been involved in the Airshow in the past, having previously sponsored the Red Arrows at the event, so to have them as the main sponsor of the 2017 Wales Airshow further cements the event partnership that’s already been established.

“As always, our aim is to make the Wales Airshow as successful and memorable as possible for many thousands of local people, visitors to the city and our sponsors.

“Back in 2015, we said we’d do all we could to make the Airshow an annual event in Swansea for the benefit of residents and businesses. Holding the Airshow for a third consecutive year demonstrates our commitment to delivering on that promise.”

Professor Richard B Davies, Vice Chancellor of Swansea University, said: “The whole Swansea region should be proud that Swansea University was named the top University in Wales and the inaugural Welsh University of the Year in the 2017 Good University Guide published by the Times and Sunday Times newspapers. As part of our celebrations, we are delighted to partner with our friends at Swansea Council to support the Wales Airshow.

“Our Department of Aerospace Engineering is recognised as one of the top 200 in the World and seventh best in the UK, with many of our academic staff and students working on projects with large companies such as Rolls Royce and Airbus, as well as the Bloodhound car which will likely break the land-speed record this year. We encourage you all to come and visit our exceptional facilities on offer at both our Singleton and Bay Campuses, and we look forward to welcoming future Swansea University students at our open days on June 17, October 14 and October 28.”

Some of the aircraft that took part in last year’s Wales Airshow included the Red Arrows, the Battle of Britain Memorial Flight and a Russian MiG from the Cold War. Details of the aircraft taking part in this year’s event will be announced over coming weeks.

Early bird partnership packages are still available for businesses and organisations looking to be involved in this summer’s Airshow. Email mags.pullen@swansea.gov.uk for more information or call 01792 635102.

Register an interest in sponsoring one of Wales’ largest outdoor events. 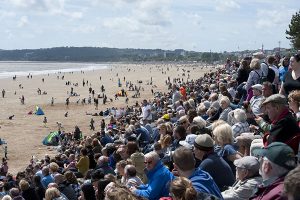 Swansea Council organises and hosts a diverse range of award winning events which attracts thousands of visitors each year. This annual events programme bring communities together, helps to sustain local businesses, provides a significant cash boost to the local economy and promotes Swansea as a fantastic location to visit, study, work and live.

In order to ensure the sustainability of this significant annual events programme, we are looking to work with businesses and organisations to ensure a mutually beneficial partnership.

We can offer a diverse range of exciting and unique partnership packages to give your business/organisation the brand recognition it deserves and help you achieve your business objectives.

Our packages are varied to suit all budgets; will be tailored to meet your requirements and can be bespoke to your company.
We are also looking for sponsors and partners who are able to provide ‘in-kind’ support and bring added value to our events. If this appeals to your business objectives then we can discuss packages more in line to this model.

If you are interested in finding out how our events programme can support your business objectives or would like more information on the packages we have to offer please don’t hesitate to get in touch..

Wow, what an incredible 2 days the 2016 Airshow was. Now who wants the good news?

Firstly, it’s a record! We officially have a record attendance of over 200,000 visitors for the weekend. Thank you all for your support, the event wouldn’t be the same without you.

Also, BIG NEWS – we can confirm that the Wales National Airshow will RETURN next year on the weekend of 1 & 2 July 2017!

Thank you everyone for coming, have a safe journey home!