The free Wales Airshow will be returning to Swansea Bay on Saturday 4th and Sunday 5th July 2020. Breathtaking aerobatic displays, state-of-the-art military aircraft and vintage planes from the past will thrill tens of thousands of visitors in Swansea Bay next summer. We’re looking to make 2020 even bigger with even more exciting air display teams and entertainment.

More information will be available soon so stay tuned to our social media accounts, this website and don’t forget to download the official Wales Airshow APP!.

Coinciding with the 50th anniversary celebrations of Swansea’s city status and Armed Forces Day, the on the ground displays and activities will be offering a range of static and interactive experiences.

Thanks to the extra space being generated by the temporary closure of part of Oystermouth Road over the weekend, the footprint of the event has been increased and displays will include static examples of the Spitfire and Hurricane planes that will be showing off their skills as part of the Battle of Britain Memorial Flight – which this year is being sponsored by Great Western Railway.

Cllr Robert Francis-Davies, Cabinet Member for Innovation, Regeneration and Tourism said: “The ground events are going to be great again this year and admission, as always, is free.

“Apart from being able to watch the Red Arrows reach for the sky, visitors will also have the chance to try out a Red Arrows simulator as well as a Typhoon

The visit of the ground-based Spitfire and Hurricane is a first for the Wales Airshow and they’ll be accompanied by experts ready to tell the wartime stories of these two iconic Battle of Britain-winning planes.

In addition to these attractions there will be a funfair at the Civic Centre west car park, military displays including a Replica Chinook and the Navy and Marines Virtual Reality Team. They’ll be giving visitors the chance to experience what it’s like to stand on an aircraft carrier as planes take off as well as an interactive boat-riding experience.

New for this year is also the RAF Police Military Working Dogs display which will take place twice a day on the beach area between The Secret Beach Bar & Kitchen (formerly the 360 café) and the old slip bridge.

On the Saturday, the Airshow couples up with Armed Forces Day which  is the annual UK celebration of the debt of gratitude the country owes to the men and women of the Army, Navy and RAF who have served – and still serve – in combat zones around the world. The Armed forces ceremony will take place at the Cenotaph on Saturday July 6th from 10.30am

Cllr Francis-Davies said: “We’re expecting over 250,000 people to enjoy the Wales Airshow, with local businesses due to benefit from millions of pounds worth of extra spending.

He said: “The city centre will be very much open for business as normal and it’s proximity to the Airshow means that people can have the best of both worlds, just a short stroll away.  As with any major event of this scale, there will be a large volume of visitors coming into the city over the weekend. For safety reasons, there will diversions in place and we would advise travellers to allow extra time when planning their journey.
Visit www.swansea.gov.uk/airshow or www.walesairshow.co.uk to download the Airshow App or to find out more information about road closures, diversions and event car parks and park and ride services.

THE RAF’S Typhoon Display Team will be performing over Swansea again this summer on both days of the Wales Airshow 2019!

The team has been confirmed for the Wales Airshow, which is taking place in Swansea Bay on Saturday July 6 and Sunday July 7.

Flying out of RAF Coningsby in Lincolnshire, the Typhoon has a maximum speed of over 1,300mph and can reach an altitude of 55,000ft, towards the edge of space. It measures close to 16 metres in length and the aircraft has a wing span of over 11 metres.

The Wales Airshow, organised by Swansea Council, is due to include attractions such as The Red Arrows and will see tens of thousands of spectators gather on Swansea Beach for two days of spectacular flying action. This year also has, for the first time, an after-dark event on the Saturday evening from 8.30pm.

Robert Francis-Davies, cabinet member for investment, regeneration and tourism, said: “We’re delighted to announce that, in the year that Swansea marks its 50th anniversary as a city, the Airshow will showcase the Typhoon display team; as always, it will be an incredible sight.

“This event increases in popularity year on year. As well as aerial displays, ground-based entertainment will also form part of the event, which is being held this summer for the fifth consecutive year.”

The Typhoon costs around £80m and is one of the world’s most advanced fighter planes. It’s so complex a machine that it can’t be flown by a human alone, it needs on-board computer back-up.

Cllr Francis-Davies continued: “The Wales Airshow is one of the UK’s biggest free events and this year we’re doing something extra to mark the city’s 50th anniversary.  The show is all about the spectacular and the huge crowds it draws really appreciate the aerial displays and ground events which form the main part of the event. Keep an eye on the Facebook page and website as more displays are confirmed over the coming weeks” A dynamic timetable of display times for the Airshow will be fed into an Airshow app a few days before the event.

The Wales Airshow App, available in Appstore and Google Play, will be updated with information about all of the displays as they are confirmed over the coming weeks. 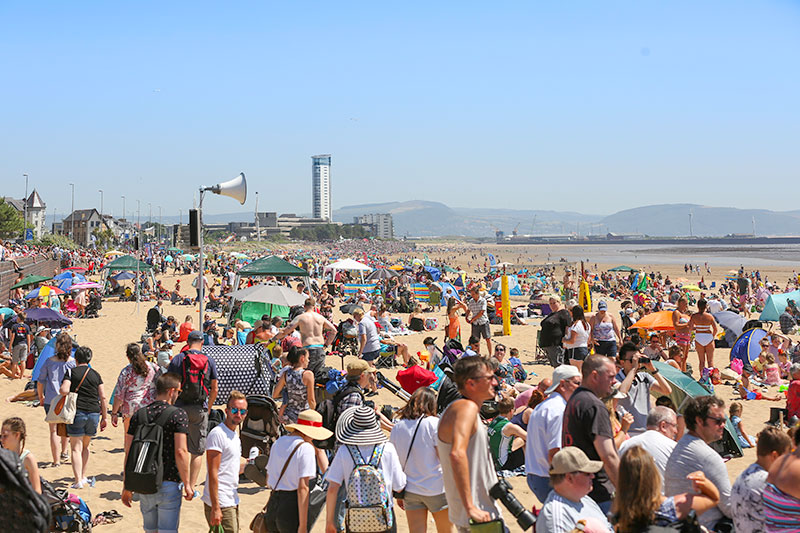